END_OF_DOCUMENT_TOKEN_TO_BE_REPLACED

Real Estate is often considered a “high-risk, high-reward” marketplace. However, that concept generally applies to short-term investments that have been made without performing a thorough analysis of the marketplace, startup costs, and, most importantly, industry trends. So, sure, “house flipping” and other “get rich quick” plans present a variety of glaring financial risks. But, with these five long-term trends in mind, and an understanding of the Washington DC apartment rental market, knowledgeable property investors can make extremely profitable long-term portfolio decisions without inheriting worrisome, immediate fiscal hazards.

Baby Boomers no longer envision their ideal retirement as a relaxing, “cookie-cutter” life in the suburbs. Instead, more and more individuals born between 1946 and 1964 are deciding to continue residing in the city, either in single-family homes or more luxurious downtown condo units. These Boomers have found that the many walkable amenities urban areas have to offer-including parks, theatres, restaurants, and musical performances- provide a heavy incentive to forego the quiet, secluded retirement experience of rural life.

As such, the rental housing market has not seen the usual migratory switch between older, married couples moving out of the city and younger, recently graduated members of the working force flocking to it. Instead, both appear to be pulled by the many advantages a diverse city such as Washington, D.C. has to offer. This long-term trend will provide intriguing incentives for participants in the urban rental market in the coming decades. And these should be heavily considered when deciding whether (or perhaps where) to invest in real estate.

Millennials are on pace to become the most educated generation ever, and that’s primarily due to the shifting U.S. economy. Simply put, many of the manufacturing jobs available to millennials’ parents simply aren’t around today. According to an article published in the Washington, Post, “over the last two decades, employment in the manufacturing sector has plummeted, from nearly 18 million jobs in 1990 to just over 12 million jobs today.” Where did these jobs go? Well, many have either been outsourced to foreign countries or pushed outside major cities to more rural suburbs. It’s no surprise, then, that downtown areas are primarily dominated by large, service sector companies.

This economic reality combined with another major characterization of the millennial generation, that they’re “lazy,” has striking implications for urban rental markets. If the assertion that millennials are, in addition to being well educated, are also somewhat indolent, it would make sense that they’d prefer to live close to their respective jobs. The urban rental unit that’s a short ride or walk from work, then, would seem to provide a tantalizing alternative for young people when compared to the 45 minute metro ride into the city.

The millennial generation has become particularly concerned with issues of tolerance, diversity, and inclusion. This is most evident from protests on college campuses, debates on social media, and political voting patterns. Indeed, this age group has been the most vocal on issues such as same-sex marriage, islamophobia, racial equality, and female reproductive rights. As more of them graduate from predominantly liberal undergraduate institutions, it’s likely that they’ll continue to value living in diverse environments.

Cities provide the ideal communal blend of cultures that no suburb can. That’s why neighborhoods such as Adams Morgan, Capitol Hill, the U Street Corridor are and will continue to be hotspots for liberal youth looking for a similarly fun, culturally diverse living environment that they experienced in college.

According to a report published by the Council of Economic Advisors to the Executive Office of the President of the United States, millennials are significantly less likely to be married between their mid 20s and 30s than their predecessors, as demonstrated in the chart below. ** 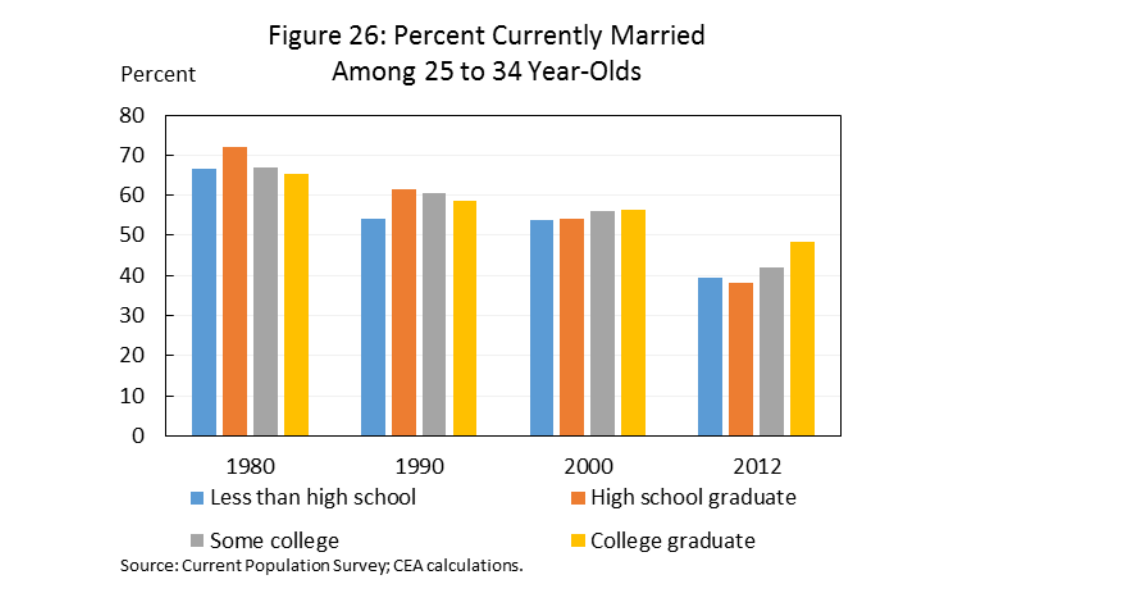 Since buying a home is the largest investment most people will ever make, couples usually wait until they are married to make the mutual financial decision. Since less young people are making the life-long commitment to marry, it makes sense that more would forego the biggest financial decision that often goes along with it, as well.

Although at first glance, these three statements might not seem interrelated, on the contrary, they all will have profound impacts on the housing and rental markets for the proximate decades. When the housing crisis triggered the Great Recession in 2008, families across the country took huge hits. As a result, many millennials’ parents had to substantial dip into or completely deplete portions of their children’s’ college funds to cover immediate debts, and some were forced to sell their houses. The personal effects of these financial circumstances are not easily forgotten.

According to the Bureau of Labor Statistics a greater percentage of young people between the ages of 18 and 34 are living with their parents than in the past three decades. At some point, these young people will move out (one would hope), and presumably become tenants in the rental market. As millennials enter the workforce and accumulate some wealth for themselves, they will be hesitant to enter the housing market that forced many of them to take on huge student loans (which they very likely might still be paying off). As an alternative, many will prefer to maintain the flexibility inherent in renting. Thus, the market will continue to experience a heavy demand for affordable, conveniently located rental homes for the foreseeable future.

Real Estate is a marketplace that investors should enter with only after scrutinizing the marketplace and industry trends. By using the most up-to-date research databases and market analysis software, selectively taking on clients, emphatically prioritizing the quality of personal, attentive customer service, and aligning our goals with our partners, Gordon James uses its time-tested and proven methods to provide the best property management expertise in the industry. If you’re considering adding property to your investment portfolio, schedule a consultation today!