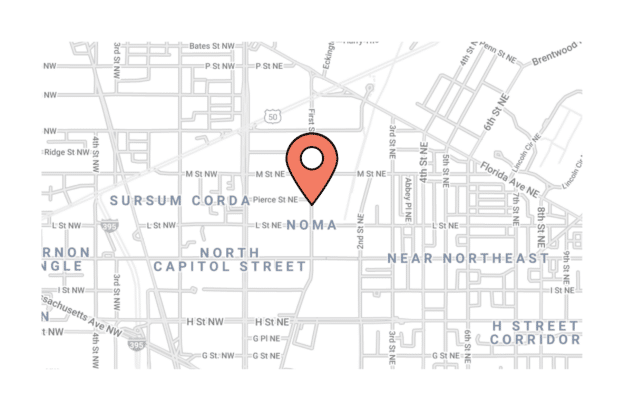 This article is part of a series on the Capitol Hill neighborhoods of Washington, D.C. In this article, you can read about the distinctive character and identity of the fast-growing NoMa area. If you plan to become a landlord in NoMa, this information will assist you as you market your rental home to prospective tenants in the neighborhood or select an experienced property management company.

The boundaries of NoMa, an abbreviation for North of Massachusetts Avenue, include the neighborhoods of Sursum Corda, Truxton Circle, Near Northeast, Swampoodle, and Eckington. About two-thirds of area households are renters, and one-third are owners, with an average household income over $93,000, according to the Washington, D.C. Economic Partnership. Residents’ median age is 32.7. Urban Turf and The Urban Land Institute offer additional data about NoMa, which has grown from the ashes of industry and vacant lots to become a hotbed of office and apartment development. ​

In the late 19th century, NoMa was defined as an area west of North Capitol Street and was populated by Irish refugees. Construction and the introduction of transit systems in the area also motivated the neighborhood’s redesign in the early 20th century. However, by the late 1990s and early 2000s, NoMa experienced revitalization through new development and growing transportation infrastructure. Today, the area once considered blighted is home to a wealth of new luxury apartment buildings, office buildings, and construction sites for coming developments. Prospective residents will be attracted by the area’s distinctive character, transportation options, and growth potential.

NoMa can offer potential tenants more than 130 shops and restaurants, as well as a variety of interesting activities and events. Restaurants in the neighborhood include Rasika, Bistro Bis, Art and Soul, and Ethiopic, among others. NoMa is also the first neighborhood in Washington D.C. to provide free outdoor WiFi, with the goal of inspiring innovation, creativity, and originality in the area’s public environment. Moreover, NoMa is one of the District’s most transit-connected neighborhoods, and residents can use 13 methods of transportation to reach other destinations in the D.C. area.

The NoMa-Gallaudet U station is on the Red Line. In addition, Metrobus routes 90, 92, 93, 96, 97, 80, P6, D3, D4, D6, D8, X1, and X3 stop in the neighborhood. Prospective residents can also use the Georgetown – Union Station and the Union Station – Navy Yard routes of the D.C. Circulator to travel around the area. The Loudoun County Transit and the MTA Commuter buses also serve the NoMa neighborhood. Other bus carriers that offer service to the neighborhood include Greyhound, BoltBus, Megabus, DC2NY, Sprinter Bus, and Washington Deluxe. Six car shares are available in the neighborhood through Zipcar, RelayRides, and Hertz On Demand. Bike share programs are available through Capital Bikeshare. WalkScore.com has assigned the NoMa neighborhood a Walk Score of 92, a Transit Score of 89, and a Bike Score of 87, out of 100 points, designating it as a “walker’s paradise” that will also appeal to tenants interested in a transit-friendly lifestyle.

The NoMa Farmers Market is located at 1325 Second Street NE in D.C. It is held on Wednesdays, between 3 pm and 7 pm, from May to October.

Many other events are held in the NoMa area. These activities include the NoMa Summer Screen film series, Family Film Night in Sursum Corda, a Pumpkin Carving Party in October for Halloween, and the Nerds in NoMa speaker series. You can learn additional details about events in NoMa on the website of the NoMa Business Improvement District.

If you are marketing your rental property in the NoMa neighborhood, you can find out more about the Capitol Hill area from The Washington Post.